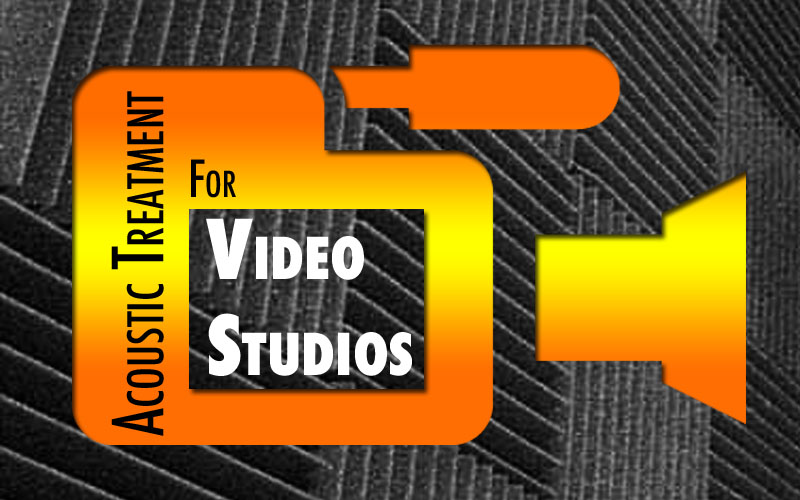 For 10 years I owned a boutique video production company called Bassline Digital, LLC.  I worked on a lot of cool projects over the years, and I was always looking for ways to improve the quality of my work.

My post production studio was simply an extra 13’x10′ bedroom in our home, where I would do all my work including sound design and final audio mixing.  Then in 2007 I had the opportunity to edit my first feature film, and along with that was the responsibility of post-production audio and final mix. I have had my short films played on very large screens and never heard any audio surprises, but I could not let the audio on this new feature film be left to chance.

It was time to find a cost-effective way to update my studio so that I could ensure I was hearing all the details of this project. I made a decision to do an acoustical treatment on my editing room.

I am not, by any stretch of the imagination, an expert in acoustics.  Just like most things in my life, I know just enough about them to be dangerous.

The problem with my room was that there were too many hard surfaces.  The drywall walls on either side, behind my monitor, and ceiling were all bare.  I knew sound was bouncing all over the room and keeping me from hearing all the detail.  The speaker placement was good, at ear level and about 4′ triangulated to my ear.  I knew the direct sound was going to sound great if I could just clean up the other early and late reflections.  Finally, I wanted to trap the extra bass, which accumulates in corners, so I could accurately hear the low end.

I know I needed to do some subjective “before” testing. I sat down and first enjoyed a few of my favorite songs. I listened to the response of the highs, how boomy or mushy the bass response was.  I then sampled some film footage from both some projects I was currently working on, and a released feature film. I took note of how clear the dialog was, and tried to pick up the subtle tonal shift in the audio as the boom mic is moved around.  I tried to hear the subtle room tone in the scene or find pops or gaps between audio clips.  I jotted down some notes for comparison later.

I looked all over the net for any articles and information about the process of treating a room to get better acoustics. I could hardly find any details on a DIY budget, and truly professional installation was financially not an option.  I was frustrated. I used Google Image search to find pictures of mixing and recording studios so I could find some visual references of what a proper installation was supposed to look like. Once I found a good picture, I would visit the website, scouring it for whatever information it may have had.

Along the way, of course I found Auralex products. I already owned their vibration isolation pads for my main studio monitors and I’ve seen their room treatment products at my local Guitar Center. After pricing it out, I really couldn’t justify spending $1000-$2000 in Auralux products to treat my room. I wasn’t looking to be the next Skywalker Sound, I just needed some basic acoustical control on a budget.

One of my best friends has a family business in upholstery, and they order foam all the time. Even though their supplier couldn’t get what I was looking for, that made me think, “I wonder if there is another upholstery business out there that DOES have acoustical foam?”

That’s when I discovered Foam N’ More & Upholstery online.  They carry tons of foam for various applications, and I was excited to discover they carried foam specifically designed for “noise control.” It visually appeared to be the same foam I saw installed in many studios.  Their website included NRC information for all the foam they sold.  I didn’t bother comparing the tech specs to Auralex because after pricing everything I would need for my room, I was surprised that it was about $200, instead of thousands. At this point, I figured I could buy all the foam I need, install it, and if for some reason it didn’t work at all I was only out a few hundred bucks. What could it hurt?

I apologize in advance for not taking photos of the assembly steps, as I never thought ahead that this would become a blog post.  I wish I had, but honestly it was really a very simple build.

I know I’m going to get flack from audiophiles about the way I’m hanging my panels. Remember, this is low budget but a high-effectiveness project. My goal was not to sound-proof my room, it was to control the audio from within the room. Feel free to research acoustically isolated Z-channel mounting hardware, but depending on your use, it may be unnecessary.

Please don’t try to hang these panels by yourself… like I did. You’ll want a friend to help and use the recommended tools too.

Panel designs I came up with.

Hit a stud? When you were drilling, you may have felt that you hit a stud. If you did, then don’t worry about putting a wall anchor in that hole, you’ll be able to secure the panel directly to a stud which is much more secure anyway. I can hear audiophiles shudder when I mentioned attaching to a stud. Keep in mind, if you want to create a sound-proof room, you typically will want to have your panels be vibration-islolated from your walls, but in my case it was not necessary.

Installing the bass traps was easy.  I put the spray adhesive directly on the foam corner pieces and put them directly on the walls.  Years later when I moved, it was a royal pain to remove the extra adhesive, so in retrospect I wonder if there was a better way.

This was the hardest part of the whole project. Holding the panel overhead in the correct location, even with a friend helping, without it shifting long enough to drill two holes was very challenging. One thing you may want to do for the ceiling is use a stud finder to identify where the joists are. I don’t know about you, I’d rather be confident knowing that the panels hanging over my head are not going to fall the first time I mix a film with a ton of LFE effects. Try to get at least two screws on each panel into joists, preferably in opposite corners of the panel.

Don’t have a Stud Finder? Alternatively, you can use a small nail and a hammer to poke around until you find the first stud. The others are either 16” or 25” on center from that.

Once I got everything in place, I went back to the sample music and film footage that I listened to before I started. I was able to notice that the bass was punchier and less boomy when listening to the music.  I was mostly surprised by the nuances of the film footage that I never heard before. It was like someone had taken cotton balls out of my ears, and I could hear with more clarity and precision than I ever could before.  This new setup has served me very well over the years.  I hope this low-budget solution finds its way to another indie filmmaker, and improves the quality of your work.