Game of “Life” – Worst Developer Ever 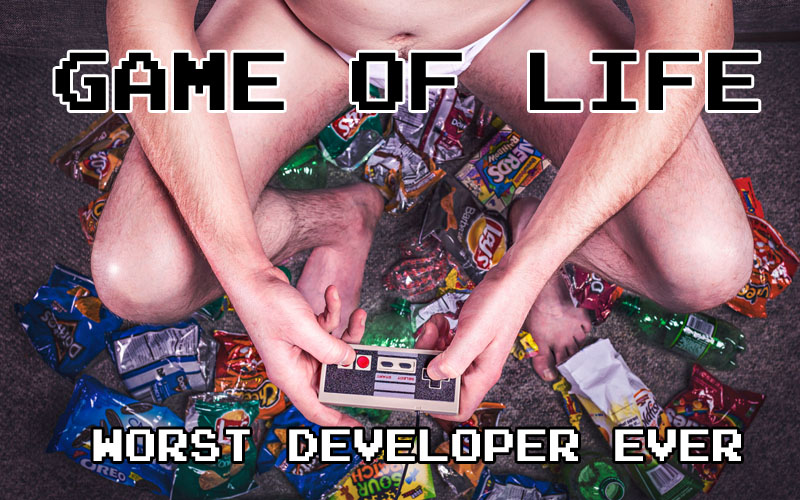 This is my review of the VR MMORPG open-world action/adventure real-time strategy puzzle simulation hardcore-mode crafting sandbox game called “Life”. It was officially released about 14 billion years ago, but is apparently still in development.

The game has had many patches and upgrades over the years to support better features, more players, new quests and more complex puzzles. It is without a doubt the most popular, widely played game ever developed. It is fun to play and so immersive that many players don’t even realize they’re playing and take it way too seriously.  I have many issues with the game mechanics and more importantly the responsiveness and decisions made by the Game’s Original Developer (GOD for short).

Every day, billions of players telepathically send in their bug reports, upgrade requests, and complaints to the developer. Nothing changes. All requests to have well-known viruses purged from the system, like AIDS, Cancer, Leukemia, ALS, are completely ignored. All requests to balance the gameplay resources like “food”, “water”, and “shelter” are discarded as well.  The developer clearly doesn’t care about the happiness of its players and doesn’t take feedback from the community for improvements. In response, many players have gotten together to create the “Science Mod”. Although not officially supported by the developer, it seems to be the only way to get anything done in lieu of a proper Player’s Handbook.

I’m talking about a simple handbook that explains how everything works, soup to nuts, the whole enchilada. Nope.  Not even a one-page quick-start guide! Absolutely no indication of what the hell the rules or goals are. We got nothing! I’ll admit the sandbox mode is pretty cool to play in though. I’ve heard that some players will try to use some in-game created items called “The Bible”, “The Koran”, or “Dianetics” as make-shift Player Handbooks. Those are merely unofficial user-submitted fan-fiction compiled over time, clearly written by fanboys of the developer.

Without the direction of a handbook, many players have started to create “games in a game” in order to keep themselves occupied.  Popular user-created games are “dominate the world”, “take everyone’s money” and “how many hot dogs can I eat in 60 seconds”.

What kind of developer makes game with no player’s handbook, then has the audacity to release it without a tutorial either? Double-whammy! Without a simple tutorial level, players typically spend up to 18 years just trying to understand the basic controls. It’s a horrible inefficient use of gameplay time, the developer should be ashamed considering the average length of gameplay.

The story doesn’t follow any resemblance of traditional narrative. It’s a total disjointed mess. All characters think they are the protagonist, inevitably making each player also feel like the antagonist from time to time which kills player morale.  I often feel like I’m an NPC in somebody else’s B-story, and them in mine. There is no clear distinction when the “inciting incident” happens or how long the “B-story” will take before you get to the “climax”.  Many players have multiple narrative arcs, some only one, and some finish the game without ever leaving the “point of no return” or “crisis” stages.  It’s completely unclear what to expect. The narrative mechanic clearly needs to be optimized. Despite the problems, the RPG possibilities can be truly staggering.

Sure, when you’re on level one, the puzzle to get the square peg in the square hole, and the star peg in the star hole was challenging and ultimately rewarding. Even some of the higher level puzzles like “graduating college” and “getting a job” are fun for a while, but eventually become old. However, there are some puzzles that were just created to watch the players suffer for amusement. Like, what’s the purpose of the damn game?!

Way too many people have this downloadable content (DLC) and it has become problematic and all-around “un fun” for the entire rest of the community. We think it was irresponsible for the developer to have even created this play mode in the first place. Even with repeated requests to pull the DLC, ban these players, or the fix the code to make it safer for everyone, the developer continues to let these problems continue.

Newer expansion packs like the Politics module, Religion module and Financials module are clearly malware. When Financials was installed, the other two were automatically installed too without my permission. I’ve tried to remove Politics and Religion since I don’t like those expansion packs, but have had no luck.  The Religion module also just seems to be in-game marketing for the developer, since that’s who everyone with that module installed talks about.

3D is a Gimmick

I’ll admit, the upgrade installed by the developer about 540 million years ago giving players two eyes was pretty cool at first. This VR with 3D perception is very immersive, but we all know it’s just a fad and it’ll never last.  This is clearly just another “shiny” distraction by the developer to keep us from complaining about all the other issues.

All of the quests in the game are vaguely stated.  When players do get a quest, they have difficult to understand goals, and in many cases the goals continue to change randomly as you play.  This can be incredibly frustrating. A simple “Quest List” would have been very easy to implement by the developer and made the gaming experience much more productive.

The player stat system and process for leveling up is clearly random and unfair. There are players who have been playing for only 10 years that are obviously a much higher level than other players who have been playing for 60 or 70 years. Luckily you are able to chose which stats you want to upgrade over time, which is a small consolation to this otherwise fundamentally broken design. The in-game camera system is exhausting… you are constantly required to spend your in-game currency (otherwise known as energy) to manually move it everywhere. Look here, look there. Luckily, there is a user-created mod called “TV” so you can just point the game camera at it for hours on end and don’t need to move around at all. Problem solved, no thanks to the developer.

Turning off Hardcore Mode is not even an option, so you only get one life. On top of that you only get one time through the game too! That’s robbery!  Thanks to the Science Mod, many people have figured out how to circumvent Hardcore Mode and continue playing despite the bad design.  I heard a rumor that the developer sometimes let’s players from the “Hindusim Clan” play the game again from the beginning, but their spawn point is completely different and the Save Game file is cleared before the restart. The point of playing again would be to enjoy it in comparison to previous times. Clearing the Save Game file completely defeats the purpose. Worst decision ever.

Finally. Who the hell writes a game without an exit button? The most terrifying problem with this game.  Very sadly, there have been user mods created to work around that problem as well. Damn that GOD.

Webb Pickersgill is a filmmaker and lead cinematic artist in the video game industry.  What you have just read is considered satire.  If you were offended by this article, you should perhaps consider that you’re playing the game “life” too seriously, and install the “chill mod”.  I’ve heard this mod can now be obtained from several stores throughout Washington and Colorado.