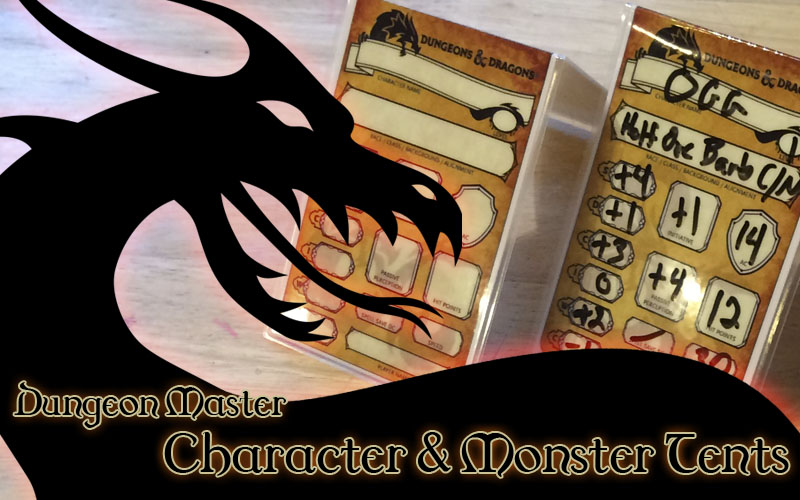 Inspired by the emails and feedback I’ve gotten from this article, I’ve decided to update all my tents and publish them on the DM’s Guild called Ultimate Character and Monster Character Tents/Card Bundle.  The new tents and cards have all original artwork and are all form-fillable PDF’s.  I can’t sell the versions I originally made here because they contain copyrighted artwork (D&D Logo and artwork from the character sheet).  However, I will continue to offer the original tents here for free and for anyone finding this article for the first time.  I’d appreciate the support over at the DM’s Guild though, the new tents are well worth the small price. :)

The first few times I DM’d a game of Dungeons and Dragons, I tried using plain old paper to write down initiative and track combat. The enthusiasm to get into the battle was always dampened by my speed to keep things organized. Additionally, I found myself flipping between pages in the monster manual, and I repeatedly asked for player’s perception, armor class and other details throughout the game. There must be a better way to run a game, so that you can spend more time with creative storytelling, and less time on mechanics.

With a little bit of poking around I discovered that some DM’s use “tents” for characters and monsters.  They can easily be stood up on the table, or hung from the DM screen.  They provide visuals to the player, information to the DM, and also are an easy way to re-arrange for showing initiative order in combat.  I loved the idea, and I wanted to make something that would not only make gameplay easier but more visual and exciting for everyone.

The goal was to make tents for both characters and monsters.  This is my “draft 1” of these tents.  I don’t expect them to work perfectly, but I hope they’ll improve the gameplay and I’ll learn how to make them better.

I wanted a way I could run a game with a room full of players I didn’t know, and easily be able to manage them and “show them” what everyone in their party looks like.  I wanted the front to show the character’s name and an area to attach some artwork for that character’s race/class.  On the back would be character and player’s names, and the key stats needed by the DM for each character to make quick and silent decisions during gameplay. Showing the back and front of the basic character tent.

The first round of tents I designed were very simple black & white tents printed on 80# cardstock.  I created them in Photoshop using graphics pulled from the official D&D 5e Character Sheets you can download from Wizards of the Coast.  A B&W page at a print shop is just $0.12/page, I designed it 4-up, so that’s just .03 for each tent.  I’d be happy to have a handful of these on hand at any time and give them to the players to fill out before a game.  Along with a library of character artwork these will do just fine.  (I’ll explain the character artwork below)

These basic tents were ok, but I wanted something that looked nicer, with more of a fantasy feel.  I added a parchment paper background, and a lighter parchment texture for all the writing areas.  Wow!  This really helped them POP!  However, at $0.60/copy, the cost per tent would be $0.15 per tent.  I’ll keep several of these with me, perhaps to share with players who I know will be returning week after week.

I wouldn’t be going broke on printing them in color by any stretch, but it could add up over time.  This made me think…  What if there was a way to reuse the color tents from session to session? Laminated color character tents showing the back and fronts with attached character art.

The next idea was to laminate a set of tents so that dry-erase markers could be used for the session, but then easily erased.  I laminated a set and tried them out.  The dry erase pens worked, but inconveniently rubbed off… so I tried WET-erase markers.  Data on the tent usually doesn’t change, so the semi-permanency worked perfectly!

The laminated tents didn’t like to be folded and cause some buckling of the lamination material.  My first round used card stock, but future version I just use regular paper and the lamination works much better.

But what about Character artwork?  There are a staggering number of character combinations you can create from race, class, background, sex, weapon selection, and well pretty much anything.  I couldn’t accommodate for all combinations, but I could try to find a bunch of them.  I created a single PDF for each class, then found artwork for as many race and sex variations as I could find.  I cut out each of the images, and use a simple paperclip to attach it to a character tent.

I figured this would allow most people to find something that got close to their character to use for the session.  If this idea caught on, players could even bring in their own artwork or even print out the entire tent and bring it with them to the game session.

Soon after I published this article, someone contacted me requesting a simplified version of the Character Tent so he could use them at conventions.  After using these a few times, they turned out to be MUCH more useful for regular games, and much faster to fill out.

I was then lucky to DM the Epic “Reclamation of Phlan”.  I didn’t want the burden of creating monster tents for all the combinations of encounters that were possible.  Instead, I opted to create simple character cards so I could lay flat near my binder and easily reference everyone’s name and character names.  For more simple games, I really enjoy this format.  Plus, I can get 8x cards to a sheet so they’re more economical to print.

It’s nice to have tents for the Characters, but what about monsters?  We’ll need tents for them too!  I’ve been playing “The Lost Mines of Phandelver” with my kids.  As part of my “draft 1” of these tents, I decided to make tents for all the monsters in this adventure and have them ready to go.

Details for the bigger monsters would not fit on the back and remain readable.  I kept the most important details, and wrote “See Monster Manual”.  For those bigger monsters, I’ll probably have that page earmarked and ready to go. The same thought I had about character tents, I had about monsters…  lamination.  It would cost a lot to laminate ALL my monsters, but I’d be willing to do it later if they really worked out well.  For now, they will remain as color cardstock.  However, if I run a game and suddenly there’s a monster that pops up that I didn’t plan for, or created from a player spell, I need a way to create them on the fly and have them work with my tent system. Showing the back and front of the laminated blank monster tents.

I decided to make blank monster tents.  Very similar to the character tents but with different statistics on the back.  The image area on the front could be used to doodle some simple artwork or write a few word description of the monster.  Until I have a bigger library of monster tents, these blank canvases will hopefully fill the need.  The back side I left a large blank area to short-hand in attacks or abilities.  I considered a more structured approach, but figured this would give me more flexibility until I’m able to do some play testing.

So I just finished making these today, so I haven’t play tested them yet.  I’m sure once they have some mileage under them I’ll be posting an update with the changes that I discovered they needed.  Until then, I hope that these tents allow me to engage my players, and be a more engaged storyteller during battle instead of having my head in the manuals.  Happy gaming everyone.