Movies vs. Films – Finding Your Top 10 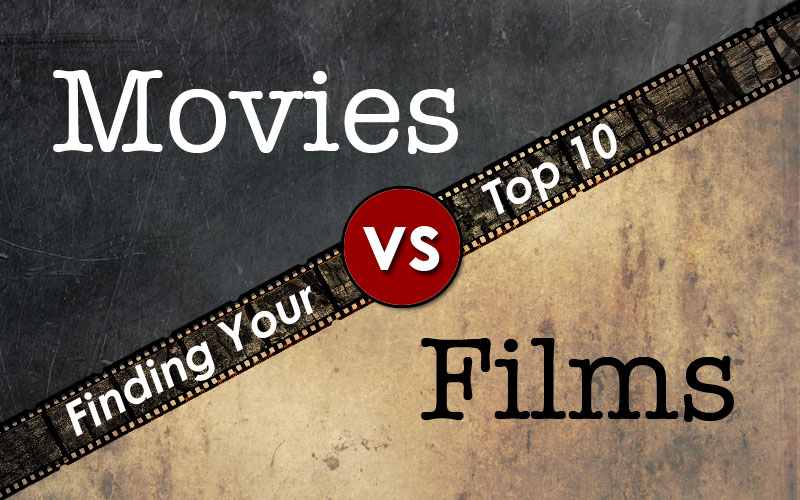 It’s an inevitability. You will be at some sort of social gathering and someone will ask you, “So what is your favorite movie?” Ironically, as a filmmaker, I never really thought about it which always made for an awkward answer to that question. Until now!

“NOOO!”, you say. “Not another stupid top-10 movie list from some random guy on the Internet!” Ok, fair enough, but this short article is much, much more than that. More than just a list of favorite movies, I want to share the process I used to assemble this list in case I could inspire you to try it for yourself, and help you avoid that awkward party question. But first…

You see, for many naive years I used the words “Movie” and “Film” interchangeably. Thanks to my time serving as the Executive Director of IFP Phoenix, I got to work with the film connoisseur Jason Carney. He is the Executive Director of the Phoenix Film Foundation and responsible for managing the prestigious Phoenix Film Festival. One day he quipped that he holds a distinction between a “movie” and a “film”. It was a glancing comment that opened a new perspective I had never considered before.

If you can identify with these statements, then it’s fair to say it might be a favorite. Ok enough philosophizing, it was time to determine what my favorite movies and films are. With over 300,000 feature films to chose from, it was daunting, but I knew I could do it.

The first step was to write down all my favorite films I could think of off the top of my head, checking the few DVD’s I still own. A few franchises came easily, Star Wars, Indiana Jones, Lord of the Rings, Matrix, as well as a few favorite one-off films like Inception and The Shawshank Redemption.  Not a bad start, but I knew I was missing many. Time for help.

The next step was to scan through the Top 250 Movies as rated by IMDB.  IMDB is the trusted encyclopedia of every film ever made with user-driven ratings.  This was a good starting point to help me identify many more movies that I really liked, but had almost forgotten about.

I also took time to scan through the Rotten Tomatoes Top Movies list. My wife Sharon always checks in on Rotten Tomatoes as her “bar of standards” before she will commit to watching a new movie with me. She won’t even consider watching a film if it doesn’t clock in at least 60%.  So, scanning these top films is pretty indicative of the films that I’ve probably watched over the past 20 years with her.

I looked through several other websites like AFI, Wikipedia, and Metacritic to be sure, but by this time I had found most of the films that I knew I wanted on my list.

Every one of these lists included obligatory classics such as Citizen Kane, The Godfather, Apocalypse Now, and 2001: A Space Odyssey. I’ve seen some of these films and while they are each interesting and ground-breaking from a cinematic history perspective, none of them really captivated me. I’ve had many fellow filmmakers get angry with me for easily dismissing these films, and that I “should” like them. Sorry.  No disrespect, they simply don’t entertain me (per my definition of a Movie) or enlighten me (per my definition of a Film).

I consciously avoided the need to include films that I thought I “should” due to some sort of filmmaker peer pressure, and stayed true to films that had meaning to me.

The last step in trying to filter out films was to look at franchises. For me, the Star Wars franchise is what started it all and if I wasn’t careful I could easily let the original trilogy dominate the list. This would be unfair to so many other impactful films. So for each major epic franchise that I enjoyed, I picked the one film that was the most meaningful to me for that series. For some, it was the first film, but for others the series didn’t really mature until about the third film.

I quickly discovered that way too many Pixar films had pushed their way up and were nudging out my other favorites. Damn you Pixar! It’s safe to say I have enjoyed every Pixar film produced, but I wanted to make sure only the most meaningful Pixar film made the top 10.

I now had a monolithic list of films I loved, so next came the process of grouping them as Movies or Films. Some were tough, but when I tested each one with, “Did this movie fundamentally change the way I saw life?” I could easily put it in the right column.

I next started to push films up and down in order, keeping a keen eye on the top 10 to see how things were playing out. Nudging films into the top 10 and out of the top 10 as necessary. This was tough!

I finally had 10 films for each list that felt right to me! Hooray! The final step was to sort them. After hours of re-ordering, arbitrarily trying to think of reasons why this film is better than that one, I admitted defeat. After a moment, I was ok with this defeat since they are each equally meaningful to me. So, although my final lists are numbered for the sake of counting them, those numbers do not necessarily represent any order of preference.

Finally, for whatever it’s worth to you, my beloved reader, here are my top 10…

Now that you’ve seen mine, time to show me yours. What will you come up with? When I meet you at that awkward social event and you indicate that you’ve read my blog, will you be ready to answer the question, “What’s your favorite film?” Because if you haven’t realized it yet, despite the gyration of assembling these two unordered lists, I apparently still cannot determine that answer myself. So, good luck! Click with Adam Sandler, but not for reasons you’d expect. I had seen the movie years ago with my wife Sharon. It was enjoyable but more-or-less a forgettable little movie. A few nights ago my 12 year old daughter Ashley came down after her bedtime and asked nicely if we could watch something together. Usually no, but I decided to browse around Netflix to see what might be suitable.  Hmmm, Click.

While the movie itself was pretty much what I had remembered, the experience of watching it with my daughter is what made it special. We would laugh awkwardly at the sometimes inappropriate humor and regularly pause the film to talk about what was going on or answer her insightful questions. At the end she was choked up. She turned to me and said, “Parents always say ‘I love you’ but I never really stopped to think what it really means until now.” She gave me a tear-filled hug, I told her I loved her, she squeezed harder. This simple little movie in my eyes, had now become the first “Film” in her top 10 list.